The property sector has been rebounding strongly this week, led by counters such as OUE, Keppeland and even s-chips like Yanlord. However, one stock stands out in this property rebound - Capitaland. Instead of following the wide sector consensus, the stock has instead diverged and went against the flow.

Outlook - Track closely for rebound in the week. Enter and follow market up to around $2.6 and take profit. 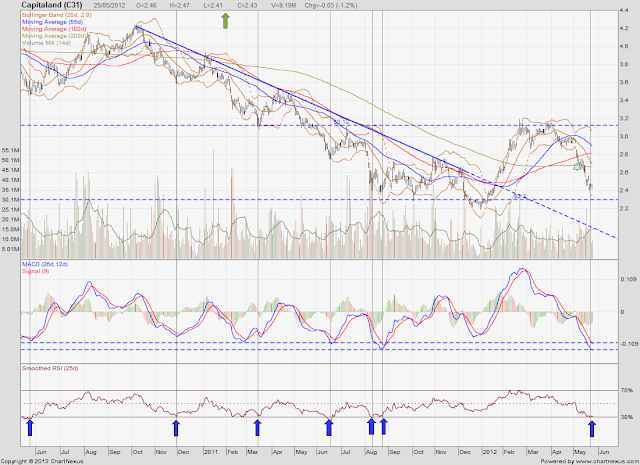 Yangzijiang had been battered badly since March when it reached a high of $1.4. Together with Cosco and NOL, they paint a picture of the malaise that the shipping industry has been facing ever since 2008 without a credible answer to the oversupply situation and more recently, the battering ram of Europe. It is however not difficult to believe that the Baltic Dry, at its current ~1000 levels, as providing one of the lowest support levels of current time. Over 4 years, news have been battering ships - how worse can it get?

Outlook - Buy on the consensus that it is in for a long investment period. Right now there is nothing to suggest that the stock may go any lower than 2011 lows unless incredible mayhem strikes Europe. Risk-defined and just be prepared to hold for a while at current levels. The time where shipping returns again is a guess as good as yours and mine. 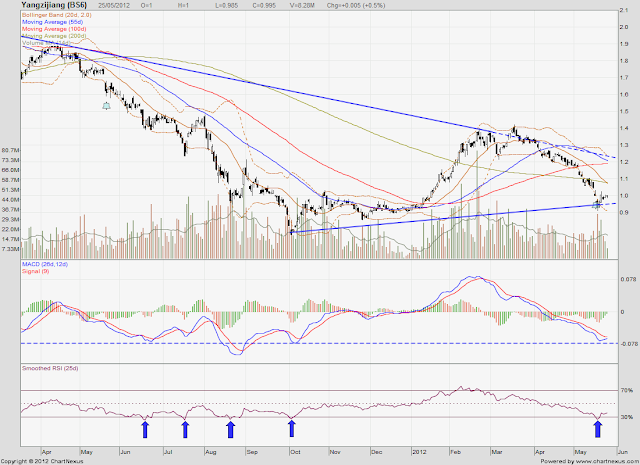 Shared by healthytrader at 1:00 AM
Email ThisBlogThis!Share to TwitterShare to FacebookShare to Pinterest